To make better contact between the ends of the two fibers, the ferrule end faces of the fiber optic patch cable is usually polishing into different structures. Standard polishing methods are PC, APC, and UPC. PC/APC/UPC represents the front end structure of the ceramic ferrule.

PC (Physical Contact). The two end faces are polished to be slightly curved or microspherical, and the fiber core is at the highest point of the bending. This eliminates the air gap and forces the fibers into physical contact.

UPC (Ultra Physical Contact) is based on the PC to optimize the end face polishing and surface finish, the end face looks more dome-shaped. The end face of the UPC connector is not entirely flat, and there is a slight arc to achieve more accurate connecting.

APC (Angled Physical Contact). The end face of APC is usually polishing into an 8-degree angle. The 8° angled bevel makes the fiber end face tighter and reflects light through its beveled angle to the cladding instead of returning directly to the source, providing better connection performance. 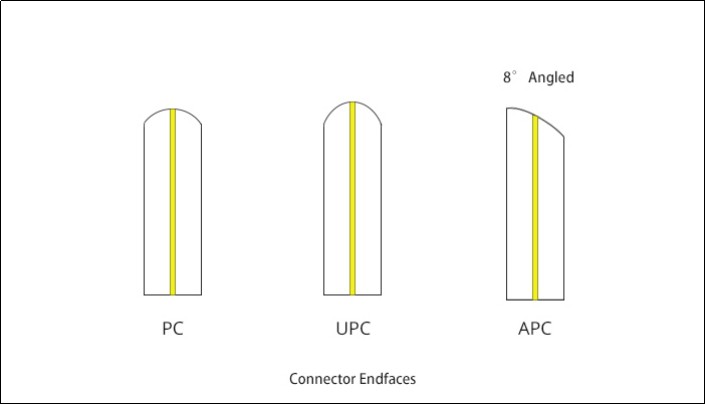 The APC fiber optic connector is usually green. UPC/PC connectors are easily identified by their blue colour on the connector boot.

Connector connections need to be in the same end face structure; for example, APC and UPC cannot be mated together, because doing so will result in poor connector performance. However, the end faces of PC and UPC fibers are flat, and the difference is in the quality of grinding. Therefore, the mixed connection of PC and UPC will not cause permanent physical damage to the connector.

What Is A Fiber Patch Panel?

What is Fiber Optic Patch Cord?

What IS FTTD (Fiber To The Desk) and Its Benefit ?